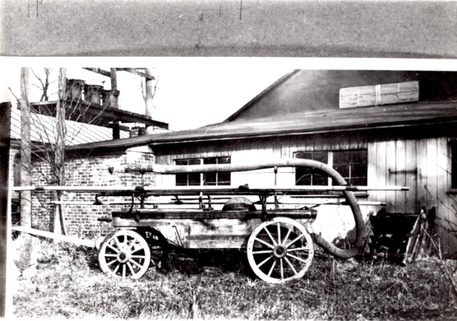 ​The Seville Volunteer Fire Department was established in 1869. For the first several years it consisted of nothing more then a bucket brigade. The equipment consisted of several buckets, a ladder or two, rope and a few volunteers to pass the buckets of water along. At one time, it was required that people have a ladder, a rain barrel, and some buckets available.

Sometime before 1900 the first hand pumper was purchased from Forest City, Cleveland, Ohio, which is now housed in a museum in Cleveland.

One of the first Chief’s was John Overholt.  He and his brother “Ike” were the owners of the Overholt Machine Shop located on the current site of Seville Centrifugal Bronze.

In 1927, Charles Rennecker took over as Chief. He owned a garage in downtown Seville, next door to the fire station. His close proximity to the station may have contributed to his being named chief.  At this time, a 1924 Maxwell pumper was purchased from the City of Rittman. It was said that the department was laughed at because the kids could out-run the truck responding to a fire call. It was felt that something had to be done, so they purchased a six cylinder Chevy engine and installed it in the old Maxwell with good results. The kids didn’t have a chance after that. They also had a 1916 Haynes with two forty-five gallon chemical tanks.

The first training course was taken n 1940. Fred Bauer was the Chief at this time. Earl Beck became Fire Chief in 1943, and remained in that role until he stepped down in 1977. Earl Beck remained on the department until his death in 1983. During his time as Chief, two new pumper-tankers were delivered in December, 1958 from Howe Fire Equipment Company, Anderson, Indiana.

After these twin trucks were purchased, it was found that the department was having growing pains. Land was purchased, and a new Fire Station, Mayors Office, and Council chambers were built at 6 Spring Street. This facility was dedicated in October, 1959.

In 1968, a new grass fire pumper truck was purchased from Sutphen Fire Equipment Company, Columbus, Ohio.  With a front mount pump, booster reels, and a 300 gallon tank, this vehicle was the first so-called “quick attack” truck in the area.  This truck remains in service today as Unit 174.  At this time, the department sold the 1940 Ford to the highest bidder.

In 1976, a new pumper-tanker was purchased from Pierce Fire Equipment Company, Appleton, Wisconsin.  Equipped with a 1000 gpm pump, a 1000 gallon tank, and dual booster reels, Unit 171-3 remains in service as a back-up pumper and support unit.

Dale Jones was sworn in as Chief in 1977, after Chief Beck stepped down.

In 1980, the department relocated to its present location at 181 Center Street.  In 1981, a new Pierce pumper with a 1000 gpm pump and 750 gallon tank was delivered.  Currently designated 171-2, this apparatus serves primarily as a supply pumper in rural applications.

In 1983, Dale Jones retired from the fire department and Dick Naftzger was sworn in as Chief in May.

In 1985 an old squad was acquired from the Emergency Medical Service and was converted into a heavy rescue vehicle. Dubbed the “Family Wagon” by the department members, this vehicle was equipped with the “Jaws of Life”, air bags, and other rescue equipment.

In the fall of 1988 the Seville-Guilford Fire Department took delivery of a new pumper-tanker from Pierce.  It is equipped with a 1250 gallon per minute pump, 2500 gallon tank, three 10” dump valves, a 2500 gallon portable tank, and other equipment needed to fight fires for the bid price of $140,000.00.  Currently serving as Unit 172, this truck provides water supply functions, and is designated as the primary pumper for fire department sprinkler connections.  After this unit was placed in service,  the two 1958 pumpers were auctioned off to the highest bidders.

In October of 1994 the department purchased a new Heavy Rescue truck from Kenco Fabrication Company, Scotdale, Pennsylvania for the low bid price of $98,000.00.  This rescue truck was built on an International 4700 series low profile chassis with a five-man cab and a walk-in rescue box.  Unit 178 is equipped with a light tower, 25KW power take off generator, and an electric hydraulic pump to power 2 tools of the “Jaws of Life” at the same time.

During Chief Naftzger’s tenure, major upgrades were made in the supply hoses, specialized equipment, turn out gear, training programs, and establishing an inspection program for the Village and Township.  Upgrades to the building included a new roof, shingles, vinyl siding, overhead doors with electric openers, and remodeling of the offices and meeting room.

On June 1, 1996 Dick Naftzger retired from the Seville-Guilford Fire Department after 37 years of service, the last 13 as Fire Chief.  On July 1, 1996, Jeff Eby was sworn in as Fire Chief, and continued to improve the fire fighting and extrication equipment as well as training.  In 2004, the department took delivery of a new Pierce pumper.   This truck came equipped with a 1500 gallon per minute pump, a 1000 gallon tank, and both class A and B type fire fighting foam cells.  Numbered 171-1, this engine serves as the first due pumper on all structural fire calls, as well as primary response to motor vehicle accidents and many other types of calls.

Beginning in late 2004 till mid 2005, the fire station underwent a compete makeover. With the addition of a seven bay, double depth apparatus floor and totally remodeling the existing station into a large kitchen, training room, and office space, the Emergency Medical Service was relocated from the old location at 6 Sprint Street to the new station, forming the Seville-Guilford Fire & EMS department.   On June 25, 2005 the newly remodeled station was dedicated to Richard "Dick" Naftzger for his long dedicated years of service.

With the merger of SGFD and SGEMS, the search began in 2006 for a full-time Chief to oversee the newly formed Seville-Guilford Fire & EMS.  In October, 2006, Jerry Winkler was sworn in as Chief.

The fleet continued to grow as a Ford chassis was donated to the department by Guilford Township.  This former dump truck was outfitted with a utility box and Unit 176-2 now tows the Fire Safety Trailer, as well as serving as a support and equipment truck.  The approximately $50,000 Fire Safety Trailer was purchased through Federal Fire Prevention & Safety grant money, and is used to educate school children, civic groups, and the general public in fire safety and prevention, as well as tornado safety.

Whatever the situation, Seville-Guilford Fire & EMS strives to provide prompt, professional emergency services to the residents of and visitors to Guilford Township, the Village of Seville, and our neighboring communities.